So we finally got around to tasting the tenth bottle of our challenge we set last year.

Villa Maria Gewurtztraminer
Lime, mango and honeysuckle on the nose.
Sharp, bitter coriander and lemon flavours.
Barry said it was "not as interesting as a normal G."
Probably because he chose a New Zealand one and had forgotten.
It's not an unpleasant wine, but not fabulous.
We scored it 3/5 for quality and 3/5 for likeability.

So how does this compare to our other challenger wines?


Badger chose:
So I won the challenge, thankfully, but the more important lesson to learn here is that even within a restricted price range, price paid isn't the best indicator of quality or likeability. For us the Fleurie was the best value, and we've bought more since, and found it works as a great present or to bring to parties.

If you want more tips on how to choose the wine YOU like, let me know what you like and I'll post some things to look out for on the label when you're buying wine.

If you want to see how we created the challenge, how we scored our wines and/or want to create it for yourself, please follow this link: http://princessandthepinot.blogspot.co.uk/2012/09/badgers-challenge.html
Posted by Soma at 9:37 AM No comments:

So, Rioja is one of those easy wines. Easy as in easy-drinking, easy to find on the shelves, easy to take to a diner party, easy to find at a cheaper price point... but is it too easy? Most of the time, for a Rioja, I used to just pick one - what does it matter, they're all roughly the same, right? Wrong.

There are four levels of Rioja


Oak ageing increases the complexity of the wine, making it more interesting to drink  more flavourful and more enjoyable. The oak adds flavours of vanilla, toffee and/or coffee. So you're looking out for a Reserva or a Gran Reserva. It may not say it on the front of the bottle but as producers can charge a premium for it, you will see it somewhere, maybe the neck or back-label.

Rioja is a region in Spain where the grapes are grown. Within Rioja there are three regions within it:
Of course it can be down to taste as to which you'd prefer, but lets think about this on a practical scale. In Rioja Alta, a Gran Reserva is likely to cost around £40, but a Gran Reserva from Baja you can get for £10. The reason being is that the vines in Alta must be hand-picked because the rows of vines are grown close together on a steep aspect. Rioja Baja is machine-picked which means the wine can be produced more cheaply, which gets passed on to you and me.

So to enjoy the full oak flavour of a Gran Reserva and you want to stick to your £10 budget, look for Baja. If you want less alcohol, then go for Alavesa. If you want fancy-pants then buy an Alta. It may not say baja on the label, but I wouldn't worry, if you're buying a Gran Reserva at a £10 price point, it won't have come from Alta! 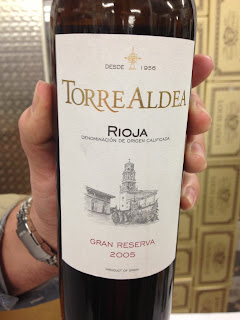 If you like more subtle oak flavours, then look for a Crianza. Again, if you go for Baja, you'll be tasting plums, spices and vanilla. For my hen do I did a blind tasting, and had a Baja wine for the first time, I was convinced it was a Shiraz, and told the sommelier so, even argued that he had poured the wrong bottle, but in fact it was a delicious Rioja. So now I know, and so do you. This tasting was at Ten Green Bottles in Brighton http://www.tengreenbottles.com/ and the Rioja was a David Moreno Crianza 2009.

If you want more tips on Rioja, or tips for another wine, please write a comment and let me know!
Posted by Soma at 12:28 PM No comments:

I went to Pizzeria on the Green for my sister's birthday, a great and cheap restaurant in Clapham, and we had to choose a white wine because my sister has braces, so we tried a Verdicchio. It was a refreshing Italian white wine, which tasted of bitter lemon and chamomile. When we got back, I check my WSET notes, and amazingly it said: expect flavours of lemon peel, fennel and bitter almond. It was a great middle ground, and I found it delicious, although the bitter lemon gives it complexity which can also be challenging, but it worked with pizza! The one we had was Fazi Battaglia. It even comes with a cute little map and story (in Italian) attached to the neck of this unusual shaped bottle.

And by the way the pizza there is delicious!! http://www.potgclapham.com/ 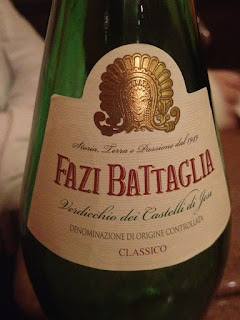 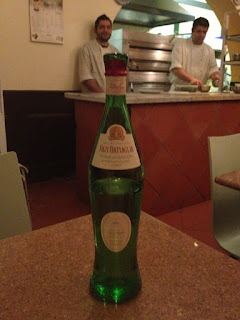 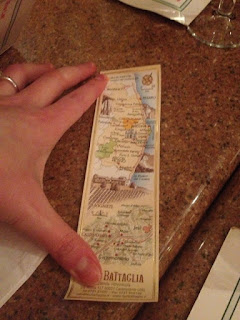 Great way to start the week, and now even better!

Planet of the Grapes on Bow Lane is a bar/shop. Normally you can buy a bottle from their shop and then pay a £10 corkage fee to drink in their lovely bar. To increase traffic on Mondays they've dropped their corkage fee. So you can buy a shop price bottle of wine for say £20 and drink it for £20. Bar prices are normally 2 or 3 times the price, so its normally a good deal anyway, but this is even better.

Planet of the grapes
Posted by Soma at 7:11 AM No comments: